IMI’s project portfolio continues to grow – in the last few weeks, we have launched our last COVID-19 project, as well as projects on advanced therapies and health information…

DRAGON - Diagnosing COVID-19 and, crucially, predicting how the disease will progress in different patients, remains a challenge. The DRAGON project aims to use artificial intelligence (AI) and machine learning to develop a decision support system capable of delivering a more precise coronavirus diagnosis and more accurate predictions of patient outcomes.

ARDAT - Developing advanced therapy medicinal products (ATMPs) such as cell and gene therapies is extremely challenging; in particular it is currently very difficult to know which patients will respond well to an advanced therapy and which will experience serious side effects. The aim of ARDAT is to deliver the knowledge, tools and standards needed to speed up the development of ATMPs.

Gravitate-Health - Vast amounts of information on medicines is available, especially online, but it is very hard to know what is reliable or even relevant for a specific patient. And, while each medicine comes with a detailed information leaflet, patients often find these difficult to read and understand.

Gravitate-Health aims to develop a digital health information tool called the Gravitate Lens (G-Lens). The G-Lens will focus (but not conceal or filter) approved information on medicines and guide patients to understandable, trustworthy, up-to-date information that meets the patient’s needs and fits with their health context and literacy levels. The functionality of the G-Lens will be supported by an open source digital platform.

Now that IMI has launched its last Calls for proposals, it’s a good time to look back on what IMI has achieved. A new brochure, 'IMI - radical collaboration in action', showcases some of IMI’s recent project successes, which include an approved vaccine for Ebola, insights into the genetics of Alzheimer’s disease, a new classification of diabetes, and advances on using liquid biopsies for cancer. In addition, many projects are making very practical contributions to the fight against COVID-19.

In the foreword, Executive Director Pierre Meulien describes IMI as ‘a neutral platform where the relevant actors can collaborate, co-create and accelerate the knowledge needed to advance innovation’, and a true partnering machine that is the cutting edge of 'radical collaboration'.

He concludes: 'As we move towards the end of the IMI2 programme, the added value of public-private partnerships in key areas for our societies and the economy remains as clear as ever.'

Europe’s research partnerships are delivering cutting-edge research and innovation and achieving great things together. These are the key messages of a new brochure entitled ‘Innovation In Action’, which was jointly produced by eight joint undertakings (JUs).

The brochure also highlights the mission-oriented nature of the JUs, as well as the ways in which they contribute to the EU’s competitiveness as well as key European policies such as the European Green Deal and Digital Europe.

The brochure showcases the work of eight JUs, which were set up as public-private partnerships to drive innovation in key sectors and rapidly tackle urgent societal challenges. Today, these partnerships are delivering results that are both scientifically excellent and have practical applications in areas that are vital to Europe’s economy, society and wellbeing, namely health, energy, digitalisation, transport, green technologies, and the circular bio-based economies.

‘These partnerships are world class and have been developed on a scale that is the envy of the world,’ says IMI Executive Director Pierre Meulien. ‘Developing partnerships on this scale is highly challenging, but the rewards when you get it right are immense and can make a real difference to people’s lives, as this new brochure shows.’

We wish all of our stakeholders a relaxing, peaceful holiday season and a happy, healthy new year.

The IMI Programme Office is closed from 24 December to 3 January inclusive. 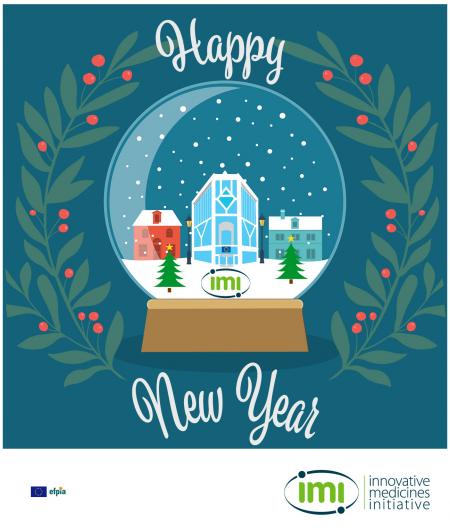 One step closer: digital readouts of walking as a measure of health

Reduced walking speed is a sign of many health conditions. The Mobilise-D project wants to make continuous digital measurements of the way a person walks, gathered using wearable sensor technology, accepted as valid indicators of their state of health, much in the same way as blood pressure readings or oxygen levels are. Now the project has received an early public nod of support for their working methods and plans from the European regulator, the European Medicines Agency (EMA).

Mobilise-D’s mission is to get these digital mobility outcomes, or DMOs, ‘qualified’ to be used as biomarkers in clinical trials. It’s an ambitious goal and they are using five different diseases as test cases. The letter of support – an intermediary sign of encouragement from the EMA on the way to full qualification - is important because it demonstrates not only the promise of the innovation, but also how important it is to build rapport with the regulating authorities early, something IMI encourages in all our funded research.

At the very start of Mobilise-D, the consortium made a strategic plan on how to get regulatory acceptance for DMOs. They decided to interact with the EMA very early on by submitting a request for qualification advice, and to take an incremental approach, starting with qualification advice of monitoring biomarkers in Parkinson’s disease.

Early interactions with regulators are particularly valuable in young and evolving fields like digital health technologies, where the regulatory framework is still under development and many things are still uncertain. The consortium’s step-by-step approach is also critical for maximising the chances of success, because it allows them to refine their plans as they gain more knowledge. With this positive feedback, Mobilise-D can progress confidently with their work.

A study in healthy volunteers showed that the antibiotic EBL-1003 is safe and well tolerated. EBL-1003 (a purified form of apramycin) shows promise as a treatment for complex drug-resistant infections. The finding is a great result for the ENABLE project, which set up an antibiotic development platform to provide researchers with the expertise, resources and support needed to advance promising early research stage antibiotics into Phase 1 clinical trials in humans.

The clinical potential of apramycin was discovered by researchers at the University of Zurich who set up a spin-out company, Juvabis, to develop it further. Juvabis joined ENABLE in 2016. Thanks to the collaboration with ENABLE, Juvabis was able to demonstrate the safety and efficacy of in animal models for various infections, including infections caused by some of the more dangerous drug-resistant bacteria.

The Phase I clinical trial started in 2019; the goal of the trial was to assess the safety and tolerability of the drug as well as how it behaves in the body. Healthy volunteers received single intravenous doses or a placebo.

The results of that trial are now in, and they show that EBL-1003 is both safe and well tolerated. The Juvabis team now plans to run a further Phase I trial in patients with complicated urinary tract infections – one of the disease areas where EBL-1003 shows the most promise.

If further trials confirm EBL-1003’s antibiotic abilities, it would be a valuable weapon for treating infections involving bacteria that are increasingly resistant to many existing antibiotics.

‘We urgently need new antibiotics to tackle the ever-growing threat of antimicrobial resistance. ENABLE’s successes demonstrate that with the right support from a team of experts from academia and industry, potential antibiotics can be identified and supported through the highly challenging early stages of antibiotic development,’ said IMI Executive Director Dr Pierre Meulien. ‘More broadly, this result demonstrates the strength of public-private partnerships in tackling major health challenges.’

RADAR-CNS is investigating how wearable technologies and mobile phones can track and help prevent depression, epilepsy and multiple sclerosis. Now, the project has teamed up with dancers, musicians and technology experts to portray in dance symptoms which may be hard to express in words. The result is Feedback Loops, which was performed at Science in the City, Malta’s national science and arts festival.

The performance responds to a quote from a member of the RADAR-CNS Patient Advisory Board: ‘A lot of my symptoms are invisible and people find it hard to understand what I’m going through.’

‘With slow, forceful heaviness as an overriding movement quality throughout the piece, I have depicted some of the visible and invisible symptoms of depression,’ says dancer Anna Spink. ‘I have included changes of focus, lower planes of motion and specific gestures to abstractly demonstrate guilt, difficulty making decisions and feeling “itchy” or uncomfortable in one’s own skin.’

Dan Wimperis explains the music: ‘Throughout the performance the dancer’s movements controls which notes are being played, the blood volume pulse (the graph on a heart rate monitor) is controlling the probability of notes being played and the volume of the notes (how hard a pianos key is pressed) and the electrodermal activity (the amount of sweat on their skin) is controlling how the notes sound, either bright or dark, far away or close etc.’

‘It’s been such an exciting project to work on with collaborators based in London, Bristol and Milan,’ says producer Alina Ivan of the RADAR-CNS project, who is based at King’s College London. ‘It has been very satisfying to have this shared intellectual space where we could share ideas (especially throughout the lockdown!) and work towards a shared goal!’