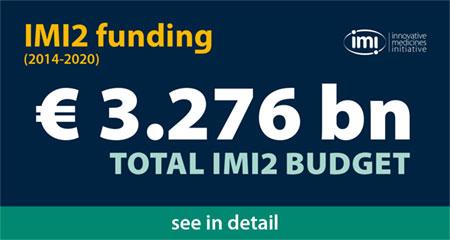 IMI funding supports the participation in its projects of organisations like universities, research organisations, patient organisations, small and medium-sized enterprises (SMEs), and (under IMI2) mid-sized companies. Details of who is eligible to receive funding can be found in the following documents:

EFPIA companies and IMI Associated Partners do not receive any EU funding through IMI, but contribute to IMI through ‘in-kind’ contributions. These contributions are mostly in the form of:

Details of what companies can count towards their in-kind contribution and how this should be calculated can be found in the following documents:

The IMI Programme Office has an in-house audit and internal control team. They are responsible for setting up and implementing procedures and systems to ensure the correct management of IMI funds.

EU funding is distributed largely on the basis of cost claims by funding beneficiaries. Prevention is always better than a cure, and with this in mind, we work to prevent recipients of IMI funding from making incorrect cost claims in the first place. For example, we provide all project participants with information and guidance to help them make claims correctly. We also run regular workshops where participants can learn in detail what costs are eligible and how to avoid errors, and ask detailed questions on IMI’s rules and procedures.

In addition, our internal procedures and checklists are designed to ensure that when a cost claim is received from a project, errors are detected before payment is made.

Finally, we send external auditors into project participants’ premises to go over cost claims with a fine-toothed comb. If they find that payments have been made in error, these are recovered.

TRUST VS COntrol - Striking a balance

In all its internal control and audit activities, IMI strives to achieve a balanced approach based on risk management. While we remain committed to achieving effective budgetary control, we do not want to overburden project participants with lengthy administrative procedures. When assessing our activities, it is important to look at all indicators, including the effective delivery of excellent science, and advancing biomedical research for the benefit of patients, and addressing challenging public health needs, such as antimicrobial resistance, dementia or diabetes.

The European Commission’s Internal Audit Service (IAS) is the official internal auditor for IMI and reports to our Executive Director and the Governing Board. The Executive Director draws assurance from the IAS audits and implements recommendations to update and improve our processes and procedures.

Another important level of budgetary control at IMI comes from the European Court of Auditors (ECA), which thoroughly scrutinises our accounts and activities. The ECA’s findings and recommendations are summarised in annual reports. We are given the opportunity to respond to the ECA report, and the report, together with IMI’s replies, is published on the ECA website and in the Official Journal of the EU. We use this report to further improve our procedures.

Finally, the European Parliament scrutinises how IMI has spent its money in a given year through the so-called ‘discharge procedure’. The lead committee here is the Budgetary Control (‘CONT’) committee, which analyses the ECA report and other materials such as IMI’s Annual Activity Reports, Reports on Budgetary and Financial Management, and annual accounts. The CONT Committee’s opinion is compiled into a report which is voted on at the committee level before being passed to the Parliament plenary. The final decision on whether or not to grant discharge is taken by the plenary on the basis of the CONT report. Members of the Parliament may also include recommendations which we further use to improve our procedures.

As of the 2014 report, the Annual Activity Report includes a breakdown of the EFPIA and (for IMI2) Associated Partner contributions by company/organisation and by cost category.

oversight of efpia AND ASSOCIATED PARTNER contributions to imi

EFPIA companies do not receive any EU funding through IMI, but contribute to the projects ‘in kind’. (Under IMI2, Associated Partners such as non-EFPIA companies can also do this.) EFPIA and Associated Partner contributions to IMI projects are reviewed from before the start of the project, when proposals for new projects are evaluated by independent experts. During evaluation, experts assess whether the proposed in-kind EFPIA contribution is in line with the work to be carried out in the project.

The European Court of Auditors audits IMI’s accounts. In doing so, the Court has full access to all the documentation linked to the reporting of the in-kind contributions and the validation and auditing of such reports.