Two thirds of IMI project publications appeared in high-impact journals, and more than half were the result of international author collaborations 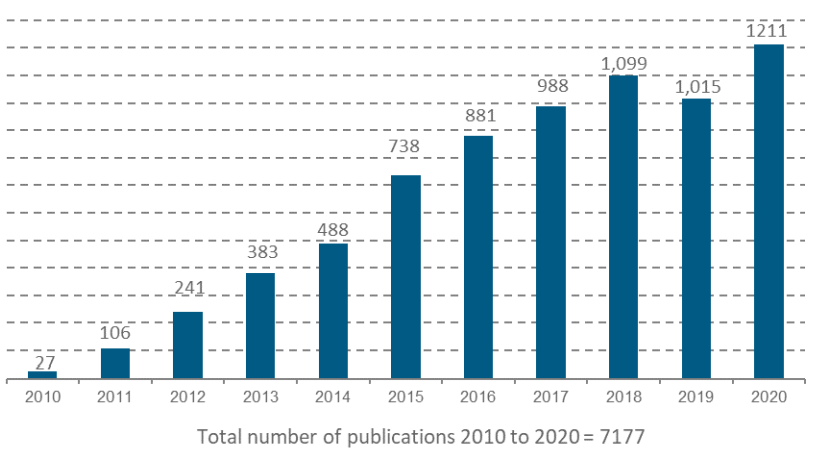 Every year, IMI analyses the publications produced by IMI projects. The latest report, prepared by Clarivate, presents IMI project publication facts and figures up to the end of 2020. The data show that IMI continues to perform well. Here are some highlights.

IMI projects produced 7,177 publications between 2010 and 2020, with a year-on-year increase. A slight decrease experienced in 2019 was more than compensated for in 2020 thanks to a number of IMI2 projects (such as AIMS-2-Trials, RESCEU, and RHAPSODY), all of which published more than double the number of papers in 2020 than in 2019. The majority of IMI research (67%) continues to be published in high impact journals (ranked according to Clarivate’s Journal Impact Factor).

The topics of research were wide-ranging, from basic biological research to clinical practice, with publications covering pharmacology and pharmacy, neurosciences and biochemistry and molecular biology appearing most frequently.

The report also looks into the 'field-normalised citation impact' of the papers – an index that is often used as a measure of research quality. The citation impact of IMI project research remains at around twice the world average, which indicates that the research was internationally influential. Between 2010 and 2020, the citation impact of IMI papers was considerably higher (73%) than the European Union’s average citation impact in similar biomedical fields. Around a quarter (25.7%) of IMI project papers were highly cited; that is, the papers were in the world’s top 10% of papers (taking journal category and year of publication into account), when ranked by number of citations.

The below graph shows the average field-normalised citation impact for all IMI papers compared to the average for EU-28 papers in relevant biomedical journal categories and all global papers published between 2010 and 2020. 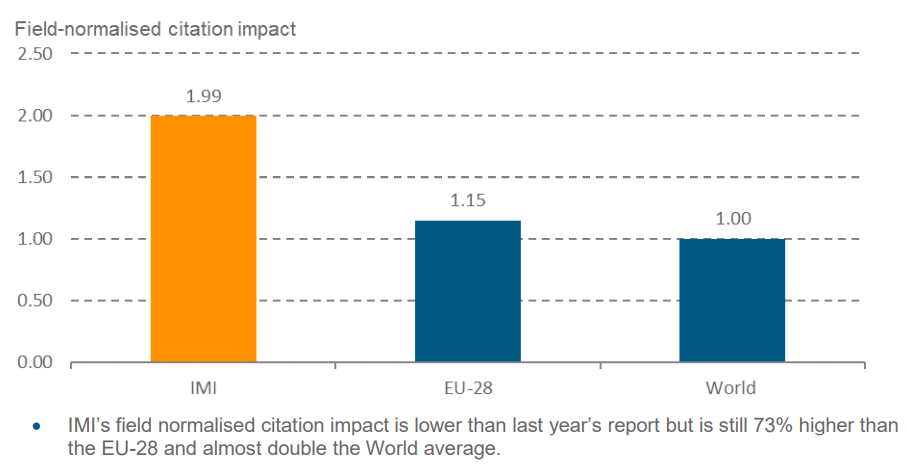 Key takeaways at a glance