Of vaccines, rumours and the success of IMI’s EBODAC project

09/03/2017 Facebook Twitter LinkedIn
When IMI’s EBODAC project started in late 2014, Ebola had already killed over 8 000 people in just a few short months, most of them in the western African nations of Liberia, Guinea and Sierra Leone. With the outbreak continuing to devastate lives across the region, fear and anxiety were rife, and rumours spread rapidly through local communities. It was against this backdrop that IMI’s EBODAC project set out to develop a community engagement strategy to enable a clinical trial of a promising new Ebola vaccine candidate. Thanks to the many innovative methods employed, including radio and drama shows, today the project celebrates its first big success: all of the adults in the trial have been successfully vaccinated. But getting there was far from easy.

For the people of Sierra Leone, it’s been one tragedy after another. After breaking free from British colonial rule in 1961, the country struggled for many years under an oppressive and corrupt domestic regime. The 1990s were marked by a brutal, decade-long civil war. The war was eventually declared over in 2002, allowing the country to begin the long and difficult process of post-war reconstruction. In 2014, disaster struck again in the form of the Ebola epidemic, which started in neighbouring Guinea. The first case in Sierra Leone was recorded in May 2014; by the end of the year, almost 10 000 people in the country had been infected with the disease and it had killed close on 3 000.

As the disease spread, scores of foreign workers came to Sierra Leone to help to contain the outbreak. Yet, in a country with a deeply rooted distrust of national and international structures and institutions, and healthcare practices in general, it was difficult to administer aid. Rumours spread, such as that Ebola was a population control strategy; or that people were being killed inside ambulances by being asphyxiated with chlorine. It was under those circumstances that IMI’s EBODAC project set out to develop a community engagement and communications strategy in order to help IMI’s EBOVAC1 project conduct a large clinical trial to test a promising new Ebola vaccine regimen. The trial protocol called for the voluntary participation of 43 subjects in stage 1, and 688 subjects in stage 2 of the trial.

Recently, the EBODAC project team celebrated some major successes: implementing a community engagement strategy to recruit and retain stage 1 participants and to support the recruitment of adults into stage 2, who have all now been vaccinated. However, getting there was no small feat: it required hard work, persistence and innovative methods of listening to and engaging with the local community.

Building everything from scratch

At the beginning of the trial, the challenges which needed to be overcome seemed almost unsurmountable. ‘We had to build everything from scratch, from no infrastructure at all,’ recounted Elizabeth Smout of the London School of Hygiene & Tropical Medicine, EBODAC project’s communication coordinator. ‘There were a few points where you just thought: I don’t know if we are going to be able to do this, because it’s just so hard. Everybody who was there absolutely lived and breathed this trial.’

In order to build trust in the community, the team had to employ many creative strategies, including radio shows, drama performances, and community meetings. ‘In a setting which was fraught with fear and rumours in general, it was vitally important that we had a whole system which would focus on just talking to people about what this trial was all about and why we were there, and why we felt that this was important,’ said Smout.

Fighting the rumours by listening to the community

The team started preparing the groundwork several months before the trial was due to begin. A community engagement team started talking to the local community and explaining the purpose of the trial. Throughout the project, they organised public meetings in partnership with influential local leaders, conducted house-to-house visits and hosted radio shows. They even commissioned a local drama group to produce a 15-minute play about the clinical trial. The plot revolved around two friends who meet and start chatting about the trial because one of them volunteered to participate in it. All this helped, but the rumours still abounded – they would sprout unexpectedly but disruptively: sometimes in a single street, sometimes spreading over the entire community. Luckily, the EBODAC team developed an innovative system to capture these rumours before they could spread out of control.

In addition to the community engagement team, the trial set up a social sciences team, whose role was to listen to the community and take note of any arising rumours early on. ‘What was particularly innovative about this approach, was this real-time feedback, the constant dialogue between the social science team and the clinical team,’ said Heidi Larson of the London School of Hygiene & Tropical Medicine, the EBODAC project coordinator. ‘This has been a critical element of why this worked so well.’

Over the course of the trial, the team had to deal with too many rumours to count. One of the more unusual ones was that getting the vaccine would turn you into a monkey. Once the social sciences team noticed this rumour in a particular street, the community engagement team sprung to action. They organised a meeting in this community but they didn’t start it by asking the people directly about this rumour. Instead, they just let people voice their concerns and eventually this rumour came out spontaneously. ‘We were able to deal with it because we had a participant there who was willing to stand up and say: I’ve had this vaccine, look at me, I am fine, I had no problems,’ said Smout. ‘We haven’t heard that rumour again in that community.’

To bolster community engagement, the trial also set up participant advisory groups in each of the three clinics administering the vaccine. The groups were a forum within which participants could get together and share their experiences without the clinic staff present. ‘This has been really important,’ said Smout. ‘It has helped our participants feel quite empowered – to be able to talk about things that have gone well, or things that have gone badly.’ When important issues were raised, a representative of the community engagement team  communicated those concerns back to clinical staff and trial management.

For example, it is thanks to this system that the team learned about an important issue that participants had with blood taking. The effect of the vaccine in the trial had to be tracked through blood sampling. However, blood in Sierra Leona is considered as very powerful and trial participants thought that they were being weakened by giving it away. In order to counter this effect, when people in Sierra Leone give blood, they usually get a can of condensed milk to make them feel better. Once the EBODAC team learned about this tradition through one of the participant advisory groups, they stockpiled condensed milk quickly in all of the clinics. Thanks to this change, the trial went on more smoothly. ‘It sounds so small, but it really made a difference in terms of participants feeling like we listened to their feedback,’ said Smout.

Since the vaccine in the trial is a two-part vaccine, another challenge was to ensure that participants returned for the second shot, and that it was the same person who received the initial vaccine. In order to track the participants in the study, the team employed innovative biometrics methods, such as iris scans and fingerprinting. Additionally, automatic text or voice recorded message reminders were sent to trial participants to remind them to come back for the second vaccine.

Harnessing the power of the public-private collaboration

Thanks to all these methods and mechanisms, the EBODAC project is widely seen as a success, and as a good example of how a good community engagement strategy can ensure the smooth running of clinical trials. According to the project members, the unique cooperation with IMI’s EBOVAC1 project and the industry partners developing the vaccine was crucial to all that was achieved.

‘The success of the project wouldn’t have been possible without the public-private partnership nature and the support of IMI,’ said Larson. ‘Given the sensitive nature of our trust-building, community engagement, communication and rumour management, it was particularly important that the funding for that dimension of the trial was coming from the public sector rather than the industry. At the same time, the private sector partnership was crucial to the collaboration and the success.’

Sharing the project learnings with a wider scientific community

In order to share the important learnings from the project with a broader scientific community, the EBODAC team recently organised a symposium in Dakar, Senegal. More than 100 participants attended the meeting, mostly African experts with experience in Ebola clinical studies, communications and community engagement. For the EBODAC team, it was crucial at this stage in the project to share their experiences before they are lost from memory, and learn from others. However, back in the field, the work continues.

The most powerful moment: ‘I will never forget that day’ 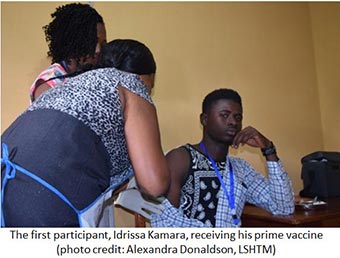 Now that all the adults have been vaccinated, the trial is moving on to the vaccination of children. In educating children and their parents, the community engagement team will use some of the same tools, such as radio and drama, but the content will be adapted to the younger audience. And that will bring its own challenges.

Luckily, the EBODAC team is quite used to dealing with challenges, and nothing seems quite as difficult as it seemed at the beginning of the trial. Despite how far the project has come, for Smout, the most rewarding moment came early on when the team administered their first vaccine to a man from Kambia. ‘At that moment when we gave the first vaccine and everything went fine, the whole team really came together in a belief that this was all worth it’, she recounted. ‘It was amazing – I will never forget that day.’