18/09/2017 Facebook Twitter LinkedIn
IMI's Mofina project researchers have developed a portable device to test in the field whether a person has caught the deadly Ebola disease. It gives reliable results in 75 minutes, which can help contain outbreaks and save lives. 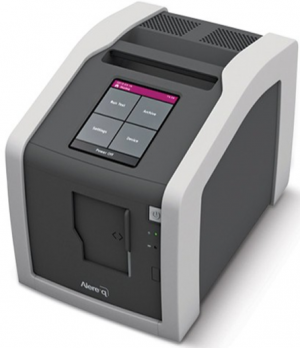 Ebola is a deadly disease which spreads among humans through direct contact with bodily fluids of infected patients. It usually begins with flu-like symptoms, rapidly progressing to multiple organ failure and internal and external bleeding. There is currently no licensed treatment, and development of medications and vaccines is hampered by challenges including time required for diagnosis.

The 2014-15 epidemic in West Africa was unprecedented. By mid-2015, World Health Organization (WHO) statistics recorded over 27 000 cases and 11 000 deaths. Given the devastation such outbreaks wreak, the sooner they are contained, the better. This highlights the need for improved diagnostics.

The EU and industry-funded MOFINA project has developed a method based on an existing automated device, called Alere q, for detecting all known strains of Ebola and the related Marburg virus. Marburg is transmitted in the same way as Ebola, has comparable symptoms and is similarly deadly.

A finger-prick blood sample is all that is needed to perform the test. A compact design of the Alere q device and internal battery to bridge power outages mean that testing can be carried out anywhere. The system is for use mainly during outbreak investigations by teams in remote rural areas lacking laboratory infrastructure.

“The quicker contacts of Ebola sufferers are tested, the easier it is to contain the outbreak,” explains project coordinator Edmund Newman of Public Health England, an executive agency of the UK’s department of health. “MOFINA addresses the challenge of rapid testing and containment during an outbreak by providing a mobile testing capability that can be taken to the patient and followed up with appropriate action based on the result.”

MOFINA is funded by the Innovative Medicines Initiative, a public-private partnership between the EU and the European pharmaceutical industry.

MOFINA uses advances in automated molecular biology techniques to isolate samples and test for viral genetic material at the push of a button. It draws on two existing technologies: a conventional Ebola test and the Alere q molecular diagnostics platform which performs nucleic acid tests on blood samples and can be used anywhere and everywhere.

Accuracy levels are similar to those in sophisticated laboratories. The test also reduces the infection risk for operators, and training materials are provided with the device.

Rapid detection facilitates isolation of infected cases, limiting opportunities for transmission. This speeds up containment and cuts the number of people getting ill and dying from the disease.

Simplifying the process makes it easier to test people in their own homes or villages. Newman stresses this means that those testing negative will not be socially stigmatised or ostracised as they may be if admitted to a treatment centre and then discharged.

The product is now commercially available. It is anticipated that potential buyers could include public health institutes, diagnostic services, WHO and non-governmental organisations tackling outbreaks.

In the long term, the platform could be expanded to cover more pathogens. The project’s partners aim to develop and manufacture diagnostic tools for each of the WHO’s ‘priority pathogens’ – those viruses and bacteria posing the greatest threat to human health.

“The consortium is now looking at ways to secure funding to further develop this technology so a wider range of infectious disease can be tested for in the one sample: not just Ebola strains but other similar diseases such as Lassa fever and hantaviruses,” says Newman.