05/03/2018 Facebook Twitter LinkedIn
A potential drawback of clinical trials of new drugs is that they do not always reflect how well these will work in the 'real world'. IMI's GetReal project brought together key stakeholders to help add more such evidence into the design of trials, increasing confidence in new medicines and helping to get them to patients more quickly. 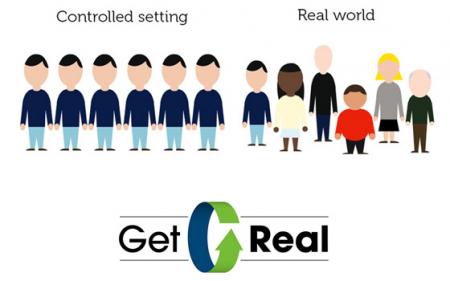 Trials of healthcare interventions are often described as either explanatory or pragmatic. Explanatory trials generally measure efficacy – the proven benefits of a treatment in ideal conditions and with standardised subjects. Pragmatic trials measure effectiveness – the benefit of a treatment in routine clinical practice and with all patients eligible for treatment who generally have a broader range of diseases or risk factors.

The EU and industry-funded GETREAL project was designed to help bridge the gap between efficacy and effectiveness by showing how new methods of real world evidence (RWE) collection and synthesis could be developed and considered for adoption earlier in pharmaceutical research and development (R&D) and the healthcare decision-making process.

The project broke ground in that it brought together companies, healthcare decision makers, patient representatives and other stakeholders to generate a consensus on best practice in the use of RWE in drug development, as well as regulatory and reimbursement decision-making.

It is hoped that the alternative evidence-generating strategies developed will deliver more focused research in pharmaceutical R&D and allow healthcare decision makers to be more confident when giving patients access to new treatments.

“Uncertainty slows things down with regard to getting new medicines to market,” says Chris Chinn, GETREAL’s deputy project coordinator. “Social and economic benefits should follow if we have been successful in helping individual research teams work with the healthcare decision makers to define evidence-based studies that ensure effective medicines have a smoother path to patients, freeing up research capital for other projects and ensuring patients start to benefit sooner.”

Teaming up to improve study designs

GETREAL fostered an unprecedented level of cooperation between a broad range of stakeholders – including scientists, regulators, payers, physicians and patients – with the aim of discussing and evaluating the potential acceptability and usefulness of real world evidence for demonstrating the relative effectiveness of new drugs.

In December 2016, the project successfully launched the ‘RWE Navigator’, a publicly available real world evidence resource. It provides guidance on the use of real world data, real world study designs and synthesis of real world data to a broad range of potential users.

It also directs the user to a range of tools developed by GETREAL, including:

GETREAL also hosted a series of webinars to support the dissemination of information and organised many cross-sector workshops and events attracting participants from academia, industry, regulatory bodies and patient organisations from across Europe.

“Although the groups did not ‘solve’ the research challenges for any particular disease, by looking at cases studies from cancer, chronic obstructive pulmonary disease and many other areas, they were able to develop tools and guidance that will help any research group work out their own solutions,” Chinn says.

GETREAL was funded by the Innovative Medicines Initiative, a public-private partnership between the EU and the European pharmaceutical industry. It plans to continue for a further two years with support from the European Federation of Pharmaceutical Industries and Associations (EFPIA) and IMI and then hopes to become a self-funding, sustainable European platform for innovation in real world medicines research.