20/10/2017 Facebook Twitter LinkedIn
IMI's QuIC-ConCePT project research into validating more imaging biomarkers for use in cancer drug trials seeks to speed up development of successful new drugs and avoid exposing patients to treatment that does not work for them. 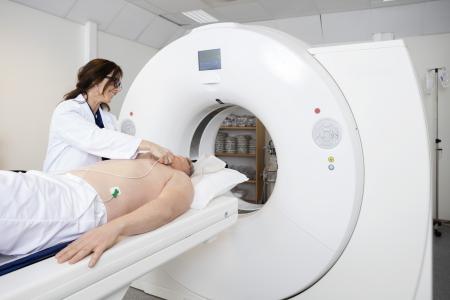 Imaging biomarkers extracted from CT, PET and MRI scans are extremely beneficial tools for assessing if a cancer drug is working at an early stage.

Their use has meant that potentially successful drugs can be identified early on in the development pipeline, speeding up market approval for some therapies and allowing drug developers to reduce costs by identifying effective or toxic compounds at the earliest opportunity. However, scientists are frustrated that not enough of these tests are validated for use in clinical research.

The EU and industry-funded QuIC-ConCePT project seeks to address this challenge by accelerating the validation of existing bioimaging markers so that they can reliably be used in drug research.

“Our frustration was that there was only a small number of imaging biomarkers that drug developers could trust,” says deputy project coordinator John Waterton, professor of translational imaging at the UK’s University of Manchester and former head of imaging at the pharmaceutical company AstraZeneca.

“The genesis of the QuIC-ConCePT project was to add to the number of imaging biomarkers that could be used in drug development. We cherry-picked a few promising tests – and then put them through a vigorous validation process.”

Testing markers so they can be trusted

A major goal of QuIC-ConCePT is for drug developers to be able to use imaging biomarkers in phase 1 clinical trials for cancer drugs and show that these are technically valid.

QuIC-ConCePT is led by Yan Liu, head of imaging at the European Organisation for Research and Treatment of Cancer. The project focuses on tumour cell proliferation, programmed cell death (apoptosis) and cell death due to injury, disease or lack of blood supply (necrosis) and has concentrated on two imaging biomarkers for measuring these.

Focus on lung and liver cancer

The team has evaluated the two imaging biomarkers, assessing their reproducibility, effectiveness, timing, dose response and imaging in animals and humans.

They are now awaiting results from two clinical trials involving a well-known cancer drug for lung and liver cancer patients to see if changes in imaging are reflected in the pathology of the cancer tumours. Results are to be published in 2018.

The project has focused on lung and liver cancers because they are technically difficult areas for imaging but important for drug development.

Significantly, a lot of academics have stayed away from imaging in these areas as it is easier to work in locations that do not move, such as the pelvis or the head. But both organs are important for cancer drugs, which are often most useful in patients with fairly advanced disease that has spread to the lung or the liver.

QuIC-ConCePT also led a consensus group that produced a set of 14 recommendations (or a ‘roadmap’) for accelerating the clinical validation of imaging biomarkers in an influential paper in the medical journal Nature Reviews Clinical Oncology.

The project is funded through the EU’s Innovative Medicines Initiative (IMI), a public-private partnership between the European Commission and the European Federation of Pharmaceutical Industries and Associations.