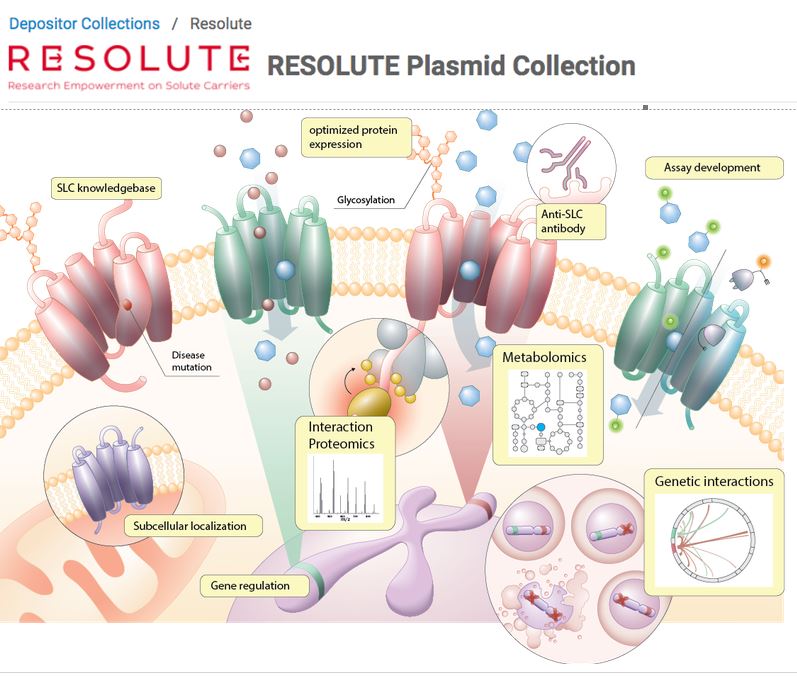 Solute carriers regulate the basic functions of our cells. They are bound to the cellular membrane and transport nutrients, like ­vitamins, sugars, amino acids, as well as drugs. However, despite being the second biggest family of membrane proteins in the human genome, and despite being implicated in diseases, such as Schizophrenia, ALS, Alzheimer’s, diabetes and cancer, there is still a great deal that we do not know about them. One of the objectives of the IMI ReSOLUTE project is to generate reagents that would allow the scientific community to work more efficiently with this family of proteins and, hopefully, make use of them as targets for drug development.

What exactly is available?

“The consortium has made available the DNA sequence of approximately 400 solute carriers. The DNA has been codon-optimised, which basically means to improve the sequence to make it easier for the cells to produce higher amounts of it. This is useful when scientists want to study these proteins in the laboratory. You might want to study what they transport, their biochemical and biophysical properties, or to purify them to determine their 3D structures.”

How does the scientific community benefit from it?

“The generation of DNA reagents is a resource-consuming process. By making openly available these powerful tools, anyone in the scientific community who wants to study SLCs will save time and money. ReSOLUTE expects to accelerate the pace of research in the field of SLCs."

How long did the process take?

“It took about a year. We first identified 446 SLC sequences, then we performed the codon-optimisation, next we checked them and finally synthesised them in collaboration with GenScript. Once they were produced, we had to insert them into a particular ‘DNA vehicle’ to allow them to enter the cell easily.”

How can the scientific community avail of them?

The DNA sequences are available at Addgene.org, which is a non-for-profit repository for this kind of reagents. Addgene sends the reagents on ReSOLUTE’s behalf for a small fee, which covers quality control and shipping costs. Any interested laboratory can order them directly from the Addgene website. In the few weeks that the material has been available, several labs worldwide have already requested the plasmids.

How long will they be available for?

The sequences will be available through Addgene beyond the end of the ReSOLUTE project in June 2023. More DNA reagents will be added to the repository in the upcoming years.