Registration is now open for the IMI2 - Call 20 webinars, which will be held from 22 to 31 January 2020 inclusive. Registration is free but obligatory via the webinar page. All webinars on the Call topics will feature a presentation by the EFPIA topic coordinator and time for questions and answers. The webinar on IMI’s rules and procedures will include presentations of IMI's intellectual property policy and tips on the preparation of proposal submissions. IMI will also hold a dedicated webinar for small and medium-sized enterprises (SMEs). This will cover elements of the different Call topics that may be of particular relevance for SMEs, as well as a presentation of IMI’s rules and procedures with a focus on aspects that are most important for SMEs.

The full webinar schedule and registration links are on the webinar page.

IMI2 – Call 20 will be launched in January 2020 and features topics on cancer, tuberculosis, psoriasis, drugs based on proteins, and vaccines. The following topics are scheduled for inclusion in the Call, and we have published updated versions of the topics on the Future Topics page of the IMI website:

The final versions of all the Call documents will be published on the IMI website and on the Funding and Tenders Portal when the Call is launched on 21 January.

Also on the Future Topics page are short summaries of topics that are tentatively under consideration for inclusion in Calls for proposals to be launched in summer 2020. These are in the fields of neurodegeneration; infection control; big data, digital health, clinical trials and regulatory research; oncology; translational safety; and rare disease therapies.

IMI research gets cited at double the global average rate

A new report by Clarivate Analytics reveals a rise in the publication performance of IMI projects, with IMI research cited 60% more than the EU average and twice as much as the rest of the world. Clarivate Analytics evaluated the research performance of projects funded by IMI for the period 2010-2018. The study shows that IMI research is featured in high-impact journals and continues to be influential internationally. To date, IMI projects have produced 4,938 publications, a 32% increase in the last year. Projects funded by IMI are also highly collaborative; 62.2% of all IMI project papers are co-authored by researchers working in different sectors; and 61.3% of all IMI project papers are internationally collaborative.

Other key facts & figures are:

We wish all of our stakeholders a relaxing, peaceful holiday season and a very happy new year.

The IMI Programme Office is closed from 24 December to 2 January inclusive. 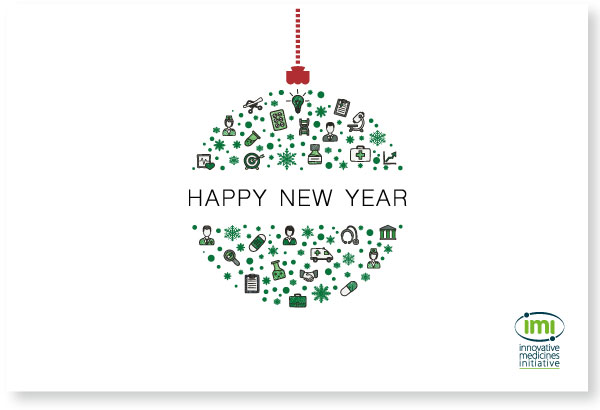 Alzheimer's researchers use AI to get access to brains

IMI’s AETIONOMY project used digital technology to simulate 'personalised' brains with individual 'wiring', allowing them to study processes associated with Alzheimer's. ‘How do we overcome the challenge of the inaccessibility of the human brain?’ asks to Professor Martin Hofmann-Apitius, academic lead of AETIONOMY, in an interview with the IMI Programme Office. ‘Actually, in-silico technologies help us to understand what is going on in the brain even before we can measure it directly by taking samples from living people.’ The AETIONOMY project used digital technology to study brains without needing samples from living people, allowing them to simulate processes associated with Alzheimer's. In their mission to establish new ways of reclassifying Alzheimer’s and other neurodegenerative diseases, the team tackled the problem of how to obtain, organise, structure, integrate and interpret a broad range of distinct types of data, ranging from molecular data, to information on symptoms, available across the neurodegeneration community. They brought new structure to the classification of disease by dissecting the underlying mechanistic and molecular causes of disease, and by linking these to clinical evidence to attempt to partially validate a selection of these mechanistic drivers.

‘Humans like reductionist approaches - one cause, one reason. But there is reason to believe there are many causes of Alzheimer’s disease that may work in combination, and that was one of the biggest scientific challenges in AETIONOMY: the combinatorial causality, Professor Hofmann-Apitius concludes. ‘The task of AETIONOMY was to unravel this and I expect to see impact of our findings at least ten years down the line.’

IMI’s EPAD project is recruiting people across Europe aged 50 and over to participate in a long-term study that will help to improve our understanding of the very earliest stages of Alzheimer’s dementia – before people have any symptoms. Participants undergo multiple assessments including regular health checks, standardised tests and brain scans over several years.

Now, the project is making data from the first visit of the first 500 participants available to the scientific community. The data has been de-identified to protect participants’ privacy, and quality controlled. Access is provided via secure online tools; researchers who want to use it have to apply via the EPAD website.

According to project coordinator Craig Ritchie of the University of Edinburgh, the research participants are enthusiastic about the move to make their data available to researchers. ‘Research participants love and expect it - they want as much knowledge to be gained as possible from their contribution,’ he says. So far, EPAD has recruited almost 2,000 people through 28 study sites in 8 European countries. As the project progresses, further data will be made available to the wider research community.

IMI’s ReSOLUTE project has made the DNA reagents for 446 solute carriers freely available in the hope that the proteins might be used as targets in drug development. Solute carriers are bound to the cellular membrane and transport nutrients, like vitamins, sugars, and drugs. However, despite being the second biggest family of membrane proteins in the human genome, and despite being implicated in diseases, such as schizophrenia, ALS, Alzheimer’s, diabetes and cancer, there is still a great deal that we do not know about them. One of the objectives of the ReSOLUTE project is to generate reagents that would allow the scientific community to work more efficiently with this family of proteins and, hopefully, make use of them as targets for drug development.

‘Now, the consortium has made available the DNA sequence of approximately 400 solute carriers. The DNA has been codon-optimised, which basically means to improve the sequence to make it easier for the cells to produce higher amounts of it. This is useful when scientists want to study these proteins in the laboratory. You might want to study what they transport, their biochemical and biophysical properties, or to purify them to determine their 3D structures,' said the project in an interview with the IMI Programme Office. The DNA sequences are available at Addgene.org, which is a not-for-profit repository for this kind of reagents. Addgene sends the reagents on ReSOLUTE’s behalf for a small fee, which covers quality control and shipping costs. Any interested laboratory can order them directly from the Addgene website. In the few weeks that the material has been available, several labs worldwide have already requested the plasmids.

The Rwandan Ministry of Health has launched a programme to vaccinate 200 000 people with the Johnson & Johnson (Janssen) Ebola vaccine regimen. The two-part vaccine regimen was developed with support from IMI’s Ebola+ programme, and studies show that it triggers a long-lasting immune response against the Zaire strain of Ebola. It will be offered to people aged two and up who live on the border with the Democratic Republic of Congo (DRC), which is currently experiencing the second worst Ebola outbreak in history. Many Rwandans regularly cross the border with the DRC for work, school, or family commitments, and the government hopes the vaccination programme will stop Ebola from impacting its citizens. The DRC started a vaccination programme using the Janssen vaccine in mid November, also with the goal of preventing the spread of the epidemic.

Genetically engineered antibodies cut infection rates in a trial. Could they wean us off antibiotics?

Researchers recently showed that an injection of monoclonal antibodies can be used to decrease the virulence of Staphylococcus aureus bacteria in patients who are hooked up to breathing machines in hospital. The phase II trial was carried out by the IMI project COMBACTE-NET, as part of the SAATELLITE study, using a monoclonal antibody developed by AstraZeneca called Suvratoxumab.

Patients in intensive care units (ICUs) who are breathing with the help of ventilating machines are at high risk of contracting pneumonia. The S. aureus bacteria make their way into healthy lungs by attaching to the medical tubing that connects to the outside world. S. aureus is extremely virulent and increasingly resistant to antibiotics. The objective of the trial was to see if patients whose lungs are already colonised by S. aureus could avoid pneumonia by being dosed with a one-off shot that would block the bacteria’s virulence, i.e. the potential for infection.

The results were promising. The researchers enrolled about 200 ventilated ICU patients in a double blind placebo controlled trial. The percentage of people in the placebo arm that contracted pneumonia was 26%, while those who had received the monoclonal antibodies injection was 18%. This is a relative reduction of 31%. Dr Bruno François from the University Hospital of Limoges, who was involved in the SAATELLITE study, is cautiously optimistic about the results.

‘This was the first trial with this type of drug to be used as a preventative,’ says Dr François. ‘This could represent a true opportunity to decrease the number of pneumonia infections in the ICU without needing any antibiotics. Of course it’s only a phase two so you would need a confirmatory trial, but it’s completely innovative.’