The five Joint Technology Initiatives – IMI, Clean Sky, Eniac, FCH, and ARTEMIS – held a week-long event, Innovation in Action, at the European Parliament.  The objective was to present their achievements to date as well as their vision on future challenges. The JTIS ran a series of joint sessions, including a debate, press breakfast and exhibition targetted at an audience that included policy makers, press, industry, academic and research organisations.  The entire event focussed on the added value of the public-private model for innovative research and the positive contributions that the JTIs make to an improved European quality of life. In light of the ongoing discussions on the Innovation Investment Package within the EU Horizon 2020 Programme, presented on 10 July 2013 by the European Commission, the event was an opportunity to raise awareness amongst key stakeholders for the ongoing need for these type of initiatives in the area of European policy on research and development.

The opening ceremony was held on the evening of Tuesday 1 October. Michel Goldman, IMI's Executive Director gave the opening addresson behalf of all five JTIs. This was followed by speeches from the event sponsors, Maria da Graҫa Carvalho, MEP and  Antonio Fernando Correia de Campos, MEP & Chairman of STOA,  the Science and Technology Options Assessment Unit of the European Parliament.  Around 60 people attended the official opening ceremony which was held in the exhibition area.

The press breakfast, hosted by Vittorio Prodi MEP, was held on the morning of 2 October. All five JTIs presented some of their top achievements. Maria da Graҫa Carvalho MEP gave her views on the JTIs and their significance for European research. 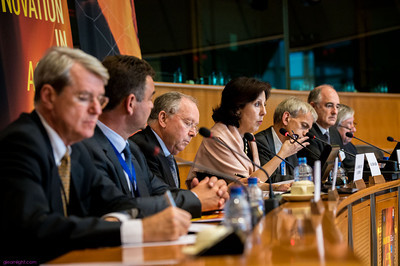 The joint exhibition, supported by STOA, set up on the ground floor of the Euopean Parliament's Altiero Spinelli building, welcomed visitors from Monday until its close on Friday.