Over 50 people attended IMI’s half-day conference in Krakow, Poland, entitled ‘IMI – New opportunities for drug research in Europe’ on 12 October. The event was a session of the Congress of Polish Biotechnology and the Central European Congress of Life Sciences (Eurobiotech), which ran from 12-15 October at Krakow’s Nowa Huta Cultural Centre (NCK).

Participants in the special IMI session learnt how IMI works and heard about the many benefits of project participation. The session also featured a spotlight on the benefits and opportunities offered by IMI to researchers in Poland and elsewhere. The IMI session closed with a networking cocktail. In addition, IMI had a stand at the Eurobiotech exhibition. 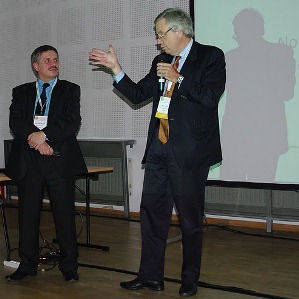 IMI – reinvigorating pharmaceutical research in Europe
Andrzej Rys, Directorate-General for Health and Consumers, European Commission and member of the IMI Governing Board

Support for potential participants in health and health-related calls
Anna Pytko, National Contact Point for Research Programmes of the EU

Researchers from across central Europe and beyond descended on Krakow for the IV Congress of Polish Biotechnology and the Central European Congress of Life Sciences (Eurobiotech), which were combined for the first time.

The event was organised by the Jagiellonian University, the University of Agriculture in Krakow, and the Biotechnology Committee of Polish Academy of Sciences.